Here’s the deal. My sinus infection causes drainage (one of my newest least favorite words) into my throat. Therefore, my throat is irritated and I end up coughing a lot, trying in vain to expel whatever it is. But I’m now on day 2 of antibiotics. So, the infection should clear up soon, and the throat issue should follow. Here’s hoping.

As a result, I’ve been coughing a lot lately. I’m not trying to make something out of nothing, but if you really consider it, coughing is a pretty amazing thing. Its your body’s independent decision at an intentional attempt to fix a problem. And believe me, its quite involuntary. In fact, I’ve found myself trying NOT to cough, depending on my surroundings…but to no avail. When your body wants to cough, its gonna cough. I’m just sorry for those around me who have to listen to it.
Case in point: I went to the doctor yesterday. When I approached the front door, there was a table set up with a warning sign that clearly said that if you were experiencing any of the following symptoms (like aches, sneezing, congestion, runny nose, coughing, fever, etc.) you had to put on a mask before entering. Since I was in fact displaying a few of those symptoms, I followed orders and put on my mask.

I opened the door and walked in the doctor’s office waiting room only to find that I was the only one wearing a mask. Awkward. I suddenly felt like….I don’t know…..just think of something that makes you feel weird. The Elephant Man, maybe. That’s how I felt. I looked around the room at the eyes looking at me, wondering what they were thinking. 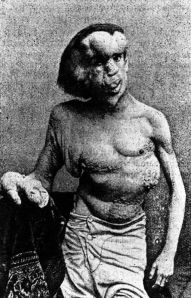 And as I was sitting there waiting, trying to occupy my mind with non-loatheful thoughts, I could feel that little tickle in my throat. Oh no. Not now. Not here. Not in front of these people who already have such disdain for my presence in their otherwise healthy air space. And out it came, a loud and boisterous cough. I covered my mouth, though now that I think about it, that was quite redundant, given my not-so-fashionable facewear.

Thankfully it wasn’t long before my name was called and I headed into the inner sanctum—where the magic happens. Halfway through my visit with the doctor, she told me that I could take my mask off; I indeed didn’t have the flu. While it wasn’t a surprise, it was a nice affirmation. She handed me my prescription and out I went, back toward the waiting room. But not before putting my mask back on. I’m not sure why I put it back on. I guess I’m just a nice guy who doesn’t want to make people think they’re breathing the same air as the Elephant Man.