I’m one of those weirdos that believe God created the universe.  If you want to know more about some of my crazy beliefs, check them out here.  The fact that I believe that is directly connected with the segment of John 9 that will make up what I’d like to kick around today.  The God of the universe is a hands-on God, but only when it comes to humans.  God has always been and is still today desirous of that kind of intimate connection with the humans He created and loves.  Look in Genesis 1 and 2; for all of creation except humans, God said, “Let there be ______….and there was               .”  But when He made humans: “And God formed man out of the dust of the ground…” (Gen. 2:7)   The implication here is that of a sculptor or a potter, shaping a masterpiece with his own two hands.  In fact, not only did God sculpt man with his hands, but He breathed His own breath of life into man.  Can you believe that the breath you’re breathing right now is the breath of God?  I’ll say it again: this is crazy stuff.

“After saying this, he [Jesus] spit on the ground, made some mud with the saliva, and put it on the man’s eyes.  “Go,” he told him, “wash in the Pool of Siloam” (this word means “Sent”). So the man went and washed, and came home seeing.” 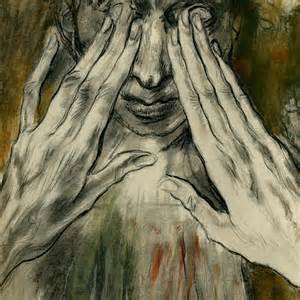 Why in the world did Jesus use the method of making mud with his own saliva and with his hands smearing it in the blind man’s eyes?   Isn’t that peculiar (and kind of gross)?  Why not do as He had done in other instances and just “say the word” and the healing happens?  And why did He instruct the blind man to go wash the mud out in a nearby pool?  Even for Jesus, this seems an odd approach to a miracle that just as easily could have been a “hands-free” situation.

Follow this quick progression: God created Adam and Eve and we walked and talked with them in the garden. (Gen. 3:8) After sin entered through their disobedience, that close fellowship was broken.  Because of sin, God could no longer have intimate fellowship with humans.  Our sin caused the divide.  But God wasn’t willing to let things stay that way.  We see in the first five books of the Bible a God who is desperately trying to get close to His people.  He goes so far as to instruct them (Exodus 25) to make an ornate box called “The Ark of the Covenant” in which He would dwell.  Is it just me, or does it seem astounding to anyone else that the God of the universe would essentially allow Himself to be “boxed in” just so that He can be close to His people?  We also know that God had a strong desire to come close to Moses, but knew that Moses couldn’t ever survive looking on the glory of God.  So God did something else equally peculiar.  He placed Moses in the crevice of a mountain where he would be shielded and then passed by Moses, covering Moses with His hand.  Once God has gone passed, He allowed Moses to see Him as he moved away from him. (Exodus 33:17-23)  Again, all because God has always desired closeness with His beloved creation, specifically humans.

Its no wonder then that at the moment of Jesus death, the veil separating the Holy Place and the Holy of Holies in the temple was torn in two (Mark 15:38).  No longer would God be separated from His creation as He has been for thousands of years.  The torn veil was the message that whoever would draw close to Me, I will welcome Him with grace and forgiveness.

So it’s actually fitting that Jesus healed the blind man with his own saliva and his own hands.  This Jesus, the only Son of God–God incarnate–is desperate to be in contact and in fellowship with you and I.  How close are you letting Jesus get to you today?

And don’t forget that Jesus involved the blind man in his own healing by giving him the instruction to wash in the pool of Siloam.  Not only has God always wanted closeness with us, but He also wants involvement with us.  He not only wants connection, but He wants communion.  How has God been drawing you close lately?  How are you responding to His invitation/instruction to be involved with Him?

Feel free to share your thoughts, and check back soon for Part 3. 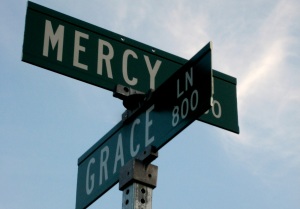 What is it about grace that ticks some people off?  Take a look at John 9 for a great example of the devastating effects of grace on a variety of people.  Here’s the situation:

There’s a blind guy that Jesus’ disciples ask about.  They want to know why he’s blind; was it because of his own sin or the sin of his parents? Fair question I guess.  Or not.  Whatever.  Either way, Jesus answers them: “Neither this man nor his parents sinned…” (v. 3)

From the disciples point of view, the blindness was a result of sin.  From a broader perspective though, they were looking through the lens of justice (he’s getting what he deserves), but Jesus was–and is–looking through the lens of grace (people getting what they don’t deserve).  And that’s shown in what Jesus says next: “…but this happened so that the works of God might be displayed in him.” (v. 3)

There’s a bunch more to say (note the “Part 1” in the title), so come back for the continuation.

For today, chat with God about which set of lenses you’re looking through as you interact with people today.  Are your responses and interactions based on grace or on justice?  Do you treat people based on how they treat you, or are you willing to go beyond the boundaries of someone else’s limits and live a grace that blesses others so that the works of God might be displayed?

This coming week is our annual “Open House” where our students do stuff like fill out their medical release form for the year, find out about ministry opportunities, sign up for small group and meet their small group leaders.

During the Open House, there’ll be an abbreviated small group time for leaders and their students.  I created the following tool for my small group leaders and figured “Hey, maybe somebody else in the world could use this somehow.”  If that’s you, great.

Error: Twitter did not respond. Please wait a few minutes and refresh this page.