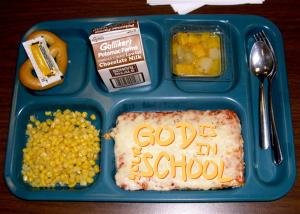 As a parent of 4 kids who all attend public school (ranging from elementary through high school), an ongoing rumbling inside me is the tension between God thriving through my kids in the context of their school, and my kids surviving the spiritually dark hallways of their (and most) school systems.

Recently, I’ve been asked by a parent about how their son/daughter should start some kind of ministry on their campus.  Before I share my thoughts, let me first say that I love the fact that students are eager to engage their peers on the public school level for the glory of God.  Because if you spend 6 hours a day in a building, I think you ought to be on the lookout for where God can use you there.

Okay, here are my thoughts on Christian teens starting something on their public school campus:

If nothing else, simply acknowledge that God–despite our society’s best efforts to push Him out the door–is still very present in public schools.  How do I know?  Because teenagers who love Him are there and they carry Him in every day.  The only way for public school system to get rid of God on their campuses is to remove every single Christian teen from those schools.  That fact alone should give any student courage to move forward by simply asking, “Where does God want me to join in?”

Go to your school’s website and look for the entire list of clubs that are offered to students.  Most times, its an incredible list that covers the gamut of role playing games, improv, chess, juggling, mock trial, hiking, and knitting.  Now, I’m not against the word “club”, but I have become somewhat opposed to making your “bible club” just another ladle on the smorgasbord of extra-curricular options.  Maybe instead of a huddle in the chemistry lab for 30 minutes after school on Thursdays, students obtain a list of tasks the principal, office staff, or janitor needs done and they do it.

Most “bible clubs” I’ve heard of or seen in operation are ingrown because they’re designed as a bomb shelter for Christian kids.  That would be fine, except in those same groups kids are wondering why more non-Christian teens don’t come.  Maybe it’s because of the prayer circle, maybe its because of the worship music sing-along, maybe its because chubby bunny just isn’t that interesting after all.  I’m not saying an evangelistic-approach group is better than a discipleship-approach group, I’m just saying decide which you’re aiming for and go with it.

You might think I’m aiming low here, but the premise is to start with one (maybe two) like-minded friends who have an interest and passion to see God work on their campus.  Meet Monday and Friday before or after school for 5-10 minutes.  Do that for a month.  Then, begin to let others in.  Start small and let it grow.  After another month is over, decide what your next step is.  Are you sensing there’s a call to announce an event?  Are you going to be more targeted and strategic in who is invited?  Make a decision…then move.  When I was a senior in high school, I along with 2 friends started meeting before school to pray.  By the end of the year we had a consistent 20-30 students gathering.

Just this morning I learned about one of our high school girls deciding with 4 friends that they’re all going to bring their Bible to lunch and have a discussion together.  They figured they’re chatting at lunch anyway, why not see what happens when they’re all chatting about the same book?  What might come from it?

Now, I’m not one of those people who want to do away with scores at ball games so no one loses, or stop having kids choose teams for kickball because that means someone gets picked last.  I think removing the prospect of failure is weakening our education systems.  That’s not the “fail” I’m talking about.  I think its incredibly important to know that if you are moving in faith on your campus, God will see it through.  Whether its short-lived or if you start a decades-long legacy your grandkids read about, you’ve joined with God on your campus, and you CAN’T fail when you’re walking with and trusting Him.

4 thoughts on “God Is In Your School”