I woke up this morning to a most horrific reality: my coffee maker was dead.  If only I had known last night that would be the last time I set the brew timer for 6:10 a.m., I’d have said something kind and meaningful…or would not have set it at all.  Luckily we had a couple of “Via” (Starbucks instant coffee) packets so that my wife and I could at least have one cup each. After that, we started twitching. 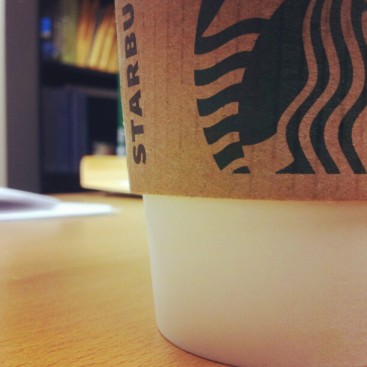 Before leaving for work, my wife asked if I’d mind stopping by Starbucks, getting her some coffee and bringing it to her at work.  Two reasons why I was more than happy to do it: 1) I was going anyway to get myself some and 2) I’d recently been given a gift card to Fivebucks and I was more than happy to spend someone else’s hard earned money on overpriced java.

When I arrived at Starbucks, I found the all-too-familiar sight of a long line of bleery-eyed caffeine addicts waiting their turn with their crack dealer barista.  As I made my way to the back of the line, I also spotted my good friend behind the counter, a barista herself.  Always bubbly, she gave me a loud, warm greeting in the presence of many witnesses.  It made me feel…well…really good.  I mean, knowing somebody behind the counter at Starbucks is like being friends with the rockstar on stage and having them point at you in the crowd while belting out a power ballad.

After shouting an equally exuberant greeting to my barista friend, I took my place at the end of the long line.  No joke; not 1/2 a second later I hear these words from my friend behind the counter: “Jerry, what are you having?” In the next half second I did two things simultaneously: I run my eyes up the line of 10 customers in front of me (most of which were now glaring at me in angered wonderment) and told her exactly what I had come in for.  Not 10 seconds after that I had my 2 cups of coffee in my hands and was striding for the door.

The uncomfortable part of my grand total of 34 seconds in the store was when I walked toward the front of the line just as quickly as I had walked to the end of it.  I swore I heard murmurings of strangers agreeing that they were disgusted by my existence. They were aghast at my good fortune, and sent me dagger eyes to go with my (oops, didn’t I mention) FREE coffee.  I’m pretty sure I finally understand what “gnashing of teeth” means.  Clearly it seemed that there was one word hanging in the air of that Starbucks this morning: unfair.

How about Zacchaeus, that “wee little man was he”?  This punk was a scammer.  A con artist.  A dude well-known for ripping people off.  And as Jesus comes to town He spots the little man in a tree and calls him down “for I’m going to your house today.”  What must the people have been thinking?  I’ll tell you what I’D have thought: “What the?!? Who in the world would want to have anything to do with that maggot Zacchaeus? I got dressed up for nothing!”

And how about the ultimate insult to those of us who think God gives two rips about your best efforts or your shiny shoes: the thief on the cross!  I mean this guy was right up there hanging next to Jesus himself and even started off mocking Jesus like everybody else was.  Then all of a sudden has a change of heart and starts yelling at the other criminal on the other side of Jesus’ cross to stop harassing Jesus, then has the audacity to say, “Jesus, remember me when you enter your kingdom.” (Luke 23:42) Are you kidding me right now?!?  This guy shouldn’t have a snowball’s chance and yet here’s the Son of God nailed several feet above the earth, EXTENDING GRACE TO A CONVICTED CRIMINAL!  You’d be hard-pressed to find more grace-filled, unfair words than those Jesus spoke to that criminal that day: “I tell you the truth, today you will be with me in paradise.”

God is a lot of things, but FAIR is not one of them!  And in my estimation, if you know of His grace you’d be wise to thank heaven for that fact, run to His arms open to anyone, and bury your face in His chest.

So, as I walked out that door of Starbucks this morning I was thankful to know of God’s grace and mindful that this grace is yours for the taking.