Well, what a day its been.  Full, busy, and rich with God doing what God does. 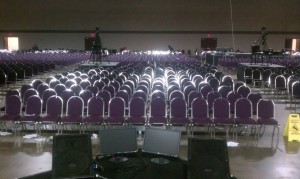 It began with a powerful message from Rick Lawrence. The outcome of that message was the still voice of God reminding me that I am His child, not my own, and not anyone else’s. HIS.  And that I am loved as I am, where I am, what I am, and who I am.  I was also reminded that while there are times that I’m tempted to think that God is done with me, “God is NEVER done.”  If I’m willing, He’s working.

Then I attended a seminar led by Fuller Institute’s Kara Powell.  The seminar was called “Sticky Faith” and the thrust of it was based out of research and study the Institute had done.  One unsurprising fact reported was that parents of teens still remain the #1 influencers in their kids lives.  What did surprise me was that “youth leaders” rank #4.  Good thing I’m a parent before I’m a youth leader.

This evening we heard a powerful message from Jon Acuff from www.jonacuff.com.  What an incredible message.  I really couldn’t have cared less if anyone else was in the room but me because as far as I was concerned, it was just for me.  Jon talked about the voices that we hear, and more importantly, the voices that we listen to and give room in our hearts and lives to have a say in who we are and what we do.  As leaders especially, we all struggle to one extent or another to four voices that speak to us.

The voice of criticism.  I can tell you exactly where I was standing and exactly what I was doing for any instance someone gave me a criticism.  Those moments sear themselves in my memory.  And unfairly too, because the words of affirmation, the countless letters, cards, and words spoken to me far outweigh the relatively few times someone has had a harsh word of criticism.  But I give far too much weight and power to the negative words people have spoken.

The voice of fame.  As Jon pointed out, “Celebrity is the biggest drug among Church leaders today.”  In subtle ways and sometimes in blatant ways, we secretly and quietly yearn for fame; to be known, to be renowned, to be recognized.  Jon reminded us that “The Alpha and Omega, the Creator of the universe knows your name, and cares deeply about your life. You ARE famous!”  Why would we strive for the approval and applause of people when we already have the approval and affection of the Creator of all those people we’re trying to impress?

The voice that says, “If anyone knew who you are–who you really are, they’d run in the other direction and you’d be finished.”  You want to know something?  I still find myself standing on the schoolyard playground while teams are being picked for kickball.  In my mind’s eye, I’m still that kid who watches classmate after classmate get chosen until no one is left unpicked but me and the kid with the lazy eye.  I’m not kidding.  More often than I talk about, I’m that kid, feeling that way about myself.

The voice of comparison.  This one is so common, but when we compare ourselves to others, we rarely do it fairly.  We typically compare ourselves to someone who is in a different place, with different gifts, with an entirely different situation than ours and we wonder why we’re not on the same level as they are.  I’ve said before that when I compare myself to others, I’m left with one of two outcomes: pride or pity.  Pride thinks I’m better than they are.  Pity thinks I’m not as good as they are. Neither of those come from God.

Then Jon turned a corner and asked if we had ever been through times when God didn’t seem to speak to us.  As Christians, we usually equate that to something gone wrong, or God being distant, or God for whatever reason withholding His voice as some type of punishment.  In Christian circles, we call these “dry” times in our spiritual lives.  I’ve been there.  But Jon pointed out something that quite honestly I’d never directly thought about.  It’s a reality in what is probably my favorite story in all of Scripture, so you know I’ve read it, studied it, dissected it, taught it, and preached on it.  How this fact missed my attention is confounding to say the least.  The story is that of “the prodigal son”.  Maybe you know the story.  Read the story whether you’ve read it before or not, and notice something: the father (representing God) is never recorded as saying even one thing to the son.  Yet this story, perhaps more than any other in the Bible, exemplifies the love of God for all of His creation.  It displays His steadfast passionate desire for a full restoration and reunion with His beloved children.  Has God seemed silent to you lately? No matter what you don’t think you hear, know beyond any doubt that God the Father is embracing you, honoring you, clothing you, hugging you, and partying over you for no other reason than His love for you. 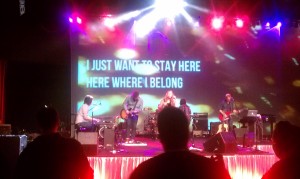 I believe that for me, today was a day of simply being still so that I could hear the still voice of God.  I clearly heard the still Gospel: the Good News that God made me, God knows me, God loves me, God liberates me, and God defends me.