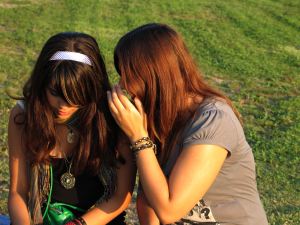 I was in a well-known big-box store two days ago, standing in the check-out line, waiting patiently for my turn as the lady in front of me wrangled with the cashier over the advertised price of a toy she had planned on buying.  It appears the price on the shelf and the price the computer came up with were two different numbers and naturally the customer expected the lower number to prevail.  They got it settled (she didn’t buy the toy), she was on her way, and it was my turn.

Now, I’m a give-them-the-benefit-of-the-doubt kind of person and maybe this cashier was at the end of her shift, but she just looked worn out.  She looked to be in her 20’s–maybe even early 20’s, she was overweight, unkempt, and overall kind of homely looking.  The recent entanglement with that last customer surely didn’t help her attitude, so I tried to step up and be extra cheery. As she rung up the 2 or 3 items I had placed on the conveyor belt, 2 teenager girls  stepped up to be next in line to check-out behind me.  With no trace of a smile, the cashier pointed to her lane number which was NOT lit and said, “I’m closing.”  With no discernable response from the 2 teen girls, she repeated herself but this time a little louder: “I’m CLOSing.”  The 2 girls looked at the cashier, looked at each other, rolled their eyes and walked away.

Then the cashier looked at me, somehow with even less of an expression than she previously had and mouthed the words, “I HATE teenagers.”  Without missing a beat, I cheerfully replied, “Well I LOVE them! But I’m a youth pastor, so there you go.”  I continued, “But lots of people feel like you do, so you’re not alone.”  (Whatever kind of twisted solace that was.)

Most of the ills in our society can be traced back to the teenage years.  I want to be sure you don’t misunderstand what I’m saying.  I’m not vilifying teenagers, not at all.  I’m simply saying that a huge chunk of who you are, how you think, what you feel about others, and your overall worldview started in your formative teen years.  And like it or not, for most people it sticks around well into adulthood and for many even to the grave.

Think about it: most habits you have (that make up your much of your “identity”) began in the teen years.  Did you know the average age for a new smoker is 13?  About half of all teens graduating high school have reported to have already had sexual intercourse.  And half of THOSE did so under the influence of drugs and/or alcohol.

Also, as we have progressed technologically as a society, we have ushered teens into a “have it now, have it all” mentality.  With our amazing modern conveniences, we have seen nearly stride-for-stride a moral compromise.  The word “could” has reached the level of “should”.  In other words, if a cell phone is within my reach, I should have one of my own.  After all, my friends all have one.  If a Facebook page is the social norm, then I should have one of my own.  If every pair of jeans I see walking around appears to be painted on, then I should also have mine painted on.  Its the word that has unfortunately become commonplace when talking about teens today: entitlement.

And this is why I LOVE working with, serving, teaching, and loving teenagers.  Because I get the extraordinary privilege and responsibility (and sometimes challenge and headache) of showing them a far better way to think about life, view life, and live life.  I get a front row seat to watch teenager after teenager come to the realization that not only are they not the most important thing on the planet, they’re not even in the top 3.  I get to watch them open their eyes to the reality that while God loves them, died for them, forgives them, and lives within them, their happiness is not His #1 priority.  And they embrace that.

That’s why I meant what I said to that cashier.  I truly do LOVE teenagers.  Not because they’re always fun to be around, or because they’ve got everything (or anything) figured out, or because they’re respectful.  It’s simply because I know that once they see the awesome potential that God has placed within them and they surrender that to Him, they’ll be unstoppable forces of God’s grace and redemption on earth.

Error: Twitter did not respond. Please wait a few minutes and refresh this page.