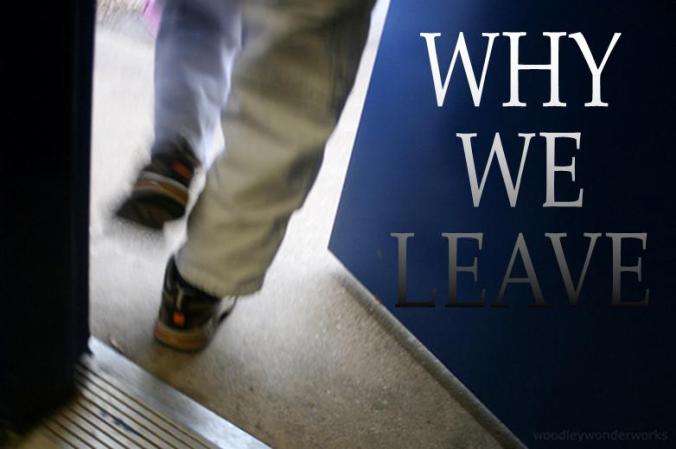 I’ve been on Twitter for a couple years now and I’m sure I’m doing something wrong because even after such a long time, I currently only have 233 followers.  *Shout-out to my Twitter followers!*  I notice (and usually take it a wee-bit personally) when someone stops following on Twitter.  It stings just a bit.  Not enough to ruin my appetite for lunch, but still. (By the way, follow me on Twitter by clicking on that link over there.)

And as a pastor, I’ve got to admit that it also stings when someone leaves the local church I’m on staff at.  I take that personally too, even though it often has nothing at all to do with me.  I wonder, “What did we do?” or “What didn’t we do?”

Now, there are plenty of dumb reasons for leaving a church and I’m sure those of you who’ve ever voluntarily left a church for another church up the road can attest to the fact that your reason wasn’t one of the dumb ones.  Of course not.  Never.  But if you’ll indulge me, I’d like to list a few of them.

Too hot. Too cold. Uncomfortable chairs. Untrimmed mustaches on the ushers. Bad coffee. Bad parking. Low lights. Wrong Bible version. Not enough candles. They shook my hand too hard. I got hugged. Stale donuts. Everybody smiles, so they must be fakers. They took an offering. The worship leader’s soul patch. The pastor says “uh” a lot. The lobby smells like egg salad. Children are too noisy and act like children. The teenagers aren’t Amish. The preacher preaches too long (besides, I felt convicted during his sermons). The bathrooms are cramped. Standing too long for singing. Too many baptisms. Not enough communion…

(There are others, but that’s what the comment section is for.)

By contrast as far as I can see, there are far fewer legitimate reasons to leave a church:

So, let’s hear it.  What are some other dumb reasons or legitimate reasons to leave a local church?

5 thoughts on “Why We Leave”